On April 29, 2017, the Coast Capital Savings Ma Murray Community Newspaper Awards drew almost 300 journalists and industry representatives from across British Columbia and Yukon together to celebrate 95 years of the BCYCNA and its members’ outstanding work and accomplishments.

In the afternoon, BCYCNA members were all invited to the Association’s Annual General Meeting, during which Andrew Franklin (Digital Director, Black Press) officially stepped into his role as BCYCNA president and Sarah Holmes (Publisher, Gabriola Sounder) concluded her very productive year at the helm.

Tim Shoults of Glacier Media stayed on as Vice-President, Doug Foot (Glacier Media) renewed his role as Treasurer, and Peter McCully (Parksville/Qualicum Beach News), Susan Attiana (The Local Weekly), Todd Hamilton (The Northern View and Haida Gwaii Observer), and Sarah Strother (Pique Newsmagazine and Whistler Question) returned as directors. Karen Hill, publisher of the Kelowna Capital News, joined the board this year. Bruce McAuliffe of Black Press retired, and was thanked for his hard work and dedication to the industry.

The evening’s festivities kicked off with the Catalyst Paper President’s Reception, as hundreds of guests mingled and enjoyed complimentary drinks and hors d’oeuvres before heading into the theatre for the main event.

Outgoing President Sarah Holmes welcomed guests to the gala and urged member papers to rise to the challenge of the industry. “It hasn’t been an easy year, and it likely won’t be easy ever again.” But she reminded the 300-strong crowd that our industry is “built on more than a hundred years of trust from readers.” Holmes continued with “permission granted to allow ourselves space in our own publications to change the message and take charge!”

Incoming President Andrew Franklin then joined Holmes on stage to accept the ceremonial President’s gavel, before sharing the same message about the importance of community papers telling their own story. “This year the BCYCNA will focus on a shift in recognition of our business,” he said. “The community media business is alive and well.”

Franklin highlighted the new BCYCNA-initiated website, newspapertraining.ca, currently in its early launch phase. This online portal has been built as the go-to place for relevant, quality training for community newspapers across the country, and will be free for all members for the first year.

MCs Kyle Donaldson (of Citytv) and Fiona Forbes (of Shaw TV and North Shore Living Magazine) took the stage next to welcome guests and provide an overview of the evening.

After a delicious root beer braised beef dinner (yum), MCs returned to the stage and, for the first time, presented the BCYCNA Community Journalism Scholarships during the evening’s event. We think it’s safe to say we showed the scholarship winners that community newspapers are the place to be!

Journalism students Melissa Pomerleau from KPU and Wade Tomko from Thompson Rivers University joined BCYCNA Scholarships Chair Todd Hamilton on stage and accepted their scholarships. Emelie Peacock from Langara was the third scholarship winner, but she was unable to attend due to already having a job at a community paper! Way to go!

From here, we launched into the official awards presentation and welcomed sponsors to the stage to hand out awards in 45 categories. The Ledcor Eric Dunning Award for Dedication and Service to the Community Newspaper Industry was among those awards. Maurice Donn of the Nanaimo News Bulletin was this year’s deserving recipient.

All winners and their colleagues showed their excitement through speeches of gratitude and social media. In fact, the #mamurray17 hashtag was once again trending on Twitter.

Exclusive wine sponsor Tinhorn Creek Vineyards supplied wine and good cheer all evening, right through the After-Party. They also offered up a two-night stay at their guesthouse for one lucky winner; Linda Calendino from the Delta Optimist was the lucky one out of the many who returned their nametags to qualify for the draw. Congratulations Linda!

An extra special treat this year were the multiple door prizes from Coast Capital Savings. Peggy Sidbeck from Parksville/Qualicum Beach News won an Apple iPad Mini for being the longest-serving community newspaper employee in attendance (45+ years!); Steve Weldon, also of Parksville, won a pair of Bose Noise Cancelling Headphones after a good old-fashioned business card draw, and the Westender’s Grant Lawrence won an Apple Watch for his hilarious selfie with a poster of Lionel Richie! Huge thanks to Coast Capital Savings for their generosity.

During the After-Party, the photo booth captured funny and embarrassing shots of costume-clad guests as it does every year, and for those who refused to let the fun end at midnight, the Glacier Lounge (Presidential Suite on the ninth floor of the resort) kept the party going until morning. And we do mean morning.

The 2017 Coast Capital Savings Ma Murray Community Newspaper Awards Gala was another huge success and after we take a little break to catch our breath, we’ll get started on the 2018 Gala, date to be announced. 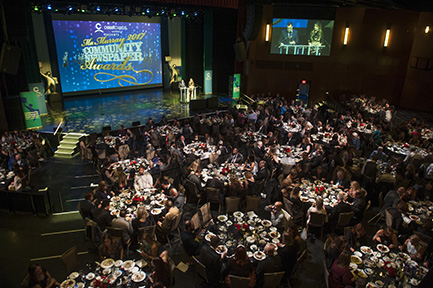 Past Results, Highlights and Videos